NEW
Check your eligibility for early access to Staking v0.1.
View now.
Interested in how Chainlink can help?
Talk to an expert

“By leveraging the Chainlink decentralized oracle network we were able to provide NBA fans with a new way to engage with the league during the most exciting time of our season.”

The NBA in partnership with the NBPA created The Association NFT collection, comprised of NFTs that automatically updated based on the on-court performance of players and teams in the 2022 NBA Playoffs. As players completed pre-set achievements, such as shooting a game-winning shot or advancing to the NBA Finals, the appearance of their associated NFT changed.

The NBA required a way to access statistics on-chain in order to make its NFTs dynamic along with a provably fair source of randomness to help distribute its 30,000 NFTs at mint.

Provided fans with a unique digital experience, helped the NBA increase engagement during the NBA Playoffs, and gained tens of thousands of new followers across its social media channels.

Use Chainlink oracle network and VRF in your application

The NBA recognizes that NFTs will play an increasingly important role in the consumer experience as the digital and physical worlds continue to converge. The NBA’s vision for The Association NFT was to create NFTs that would dynamically evolve based on individual players’ and teams’ on-court performance throughout the 2022 NBA Playoffs.

Implementing this requires NBA statistics to be referenced so that the NFTs could dynamically update in real-time. And as certain NFTs minted would be rarer and in higher demand, such as those for Golden State Warriors players that emerged as the 2022 NBA Champions, it was essential that they were distributed in a fair and verifiably random manner. Adding to the challenge, there was a small window between the Play-In Tournament that determined which NBA teams would advance to the post-season and the start of the NBA Playoffs in which the project needed to be developed and launched.

“We wanted to create NFTs that dynamically evolved based on player and team on-court performance throughout NBA Playoffs. What we needed was a way to update the NFT in real-time and to fairly distribute the NFTs during the launch.”

The NBA Integrated Chainlink Oracle Network and VRF, Enabling It To Launch Its Dynamic NFT Collection

The NBA integrated Chainlink oracle network in order to securely and reliably access NBA statistics on-chain. This enabled the appearance of player NFTs to automatically update based upon pre-set achievements written into the smart contract. The better a player’s on-court performance during the 2022 NBA Playoffs, the more their NFT would visually change. By integrating Chainlink oracle network, the NBA is leveraging a battle-tested oracle network that already helps secure tens of billions of dollars in smart contract value across DeFi.

The NBA used Chainlink Verifiable Random Function (VRF) to help randomly and transparently assign each NFT to a collector in a provably fair manner, meaning that nobody knew which 2022 NBA Playoffs player they received prior to the reveal. As both of these Chainlink trust-minimized services are seamless to integrate, the NBA was able to launch the collection in time for the NBA Playoffs.

“Chainlink trust-minimized services helped us create dynamic NFTs that evolved based on pre-set achievements written into the smart contract, and then fairly distribute them to fans during the launch.” 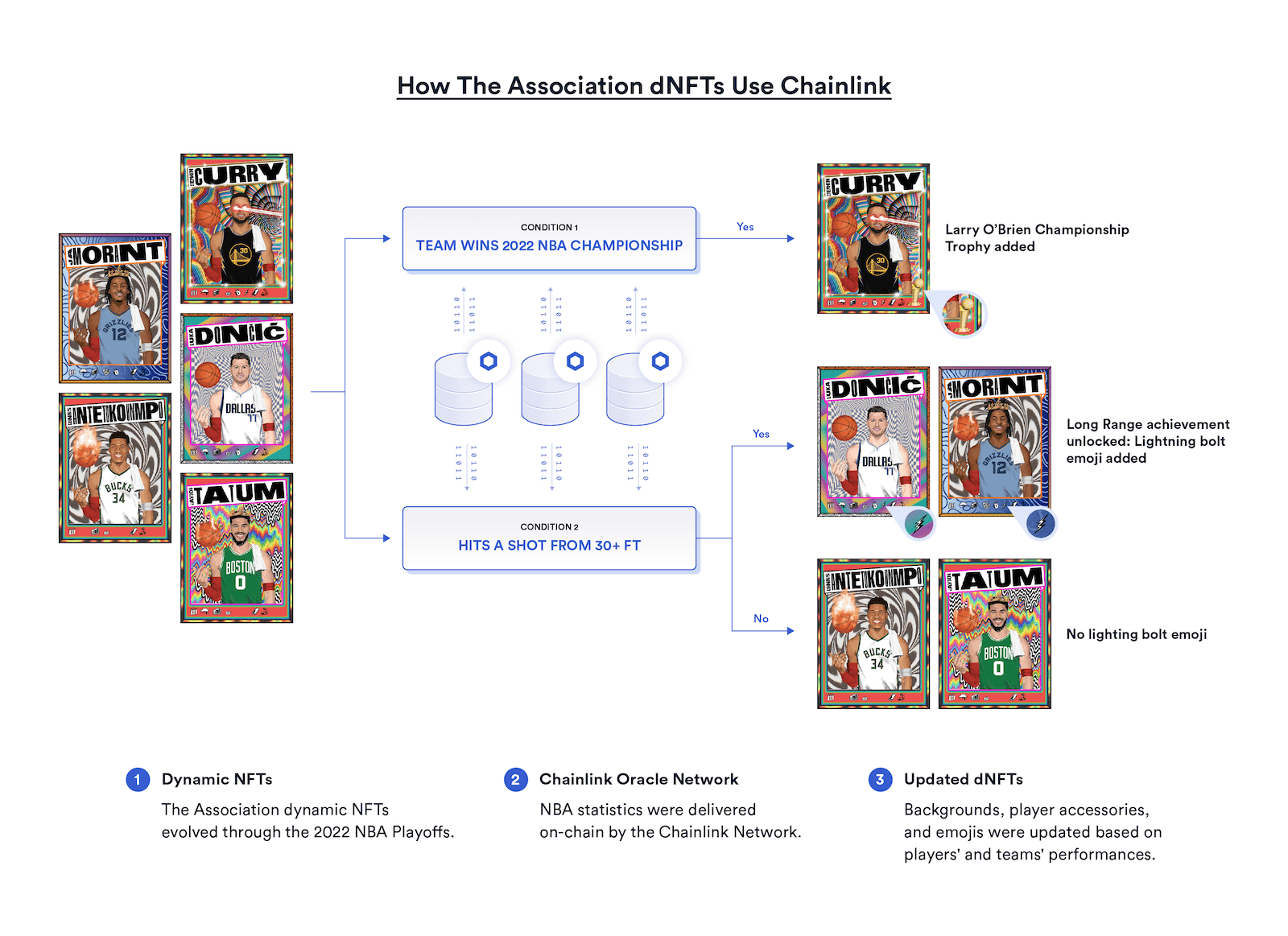 The Chainlink Network delivers NBA statistics on-chain to enable updates for The Association dNFTs based on player’s performance.

After integrating Chainlink oracle network and Chainlink VRF into its NFT project, the NBA was able to distribute The Association NFTs in a provably fair manner and automatically update the NFTs throughout the NBA Playoffs based on the performance of players and teams. Demand for these dynamic NFTs led to millions of dollars in trading volume.

This unique experience increased engagement during the NBA Playoffs and drove tens of thousands of new fans to the NBA’s social media channels.