NEW
Chainlink NFT Floor Price Feeds are now live on mainnet.
Read the docs.
Interested in how Chainlink can help?
Talk to an expert

“Chainlink VRF’s tamper-proof and verifiable random number generator gives us a transparent source of on-chain entropy to demonstrably show that our team cannot influence the distribution of NFTs.‍ As a result, all Polychain Monsters generated from booster packs are provably random, giving each user a fair chance to mint the most collectible monsters.”

CEO and Co-Founder of Polychain Monsters

in the first 5 months since their April 2021 launch

1 integration
to generate all randomness

Polychain Monsters are beautifully animated cross-chain NFTs with varying scarcity, waiting to be discovered in digital booster packs. Each Polychain Monster is backed by a truly unique NFT.

Polychain Monsters is a novel blockchain game featuring collectible NFT monsters with diverse traits and rarity that users can train to fight battles in the Polyverse for rewards.

Polychain Monsters needed a secure and transparent source of randomness to prove that each NFT monster generated from a Booster Pack is truly random.

Integrated Chainlink VRF to access a tamper-proof and auditable random number generator (RNG) for assigning random NFTs to each Booster Pack in a provably fair and unbiased manner.

Use cryptographically secure, verifiable randomness in your blockchain gaming project

Non-fungible tokens (NFTs) have gained significant momentum within the gaming industry, offering a way for players to directly own in-game assets and use them to earn rewards in what’s called play-to-earn gaming. These new blockchain-based digital tokens can represent characters, weapons, equipment, or various other items, giving gamers total control over the in-game assets they’ve worked hard to earn. Since NFTs exist on blockchains instead of centralized servers, they are permissionlessly transferable, immutably stored, and easily verifiable as rare.
‍
Polychain Monsters is a novel cross-chain game featuring NFT-based digital collectibles that players use to interact in the Polyverse—a play-to-earn gaming ecosystem that’s home to the Polychain Islands and Polymon World, where users construct buildings, trade with other players, and compete in battles and tournaments. These worlds are inhabited by 11 different species of Polychain Monsters, which are NFTs with features of varying rarity, most notably, differences in color, horn, and glitter.
‍
Users earn Polychain Monsters by purchasing Booster Packs, which randomly mint a set of NFTs based on three traits with varying rarity probabilities. Since scarce NFTs can incur high valuations, as seen by the $1.2B in NFT sales in July 2021, the Polychain Monsters team wanted to ensure that each player had an equal opportunity to mint the rarest and most sought after monsters in Booster Packs. The Polychain Monsters team quickly realized they needed a random number generator (RNG) that was unexploitable, transparent, and verifiably fair. 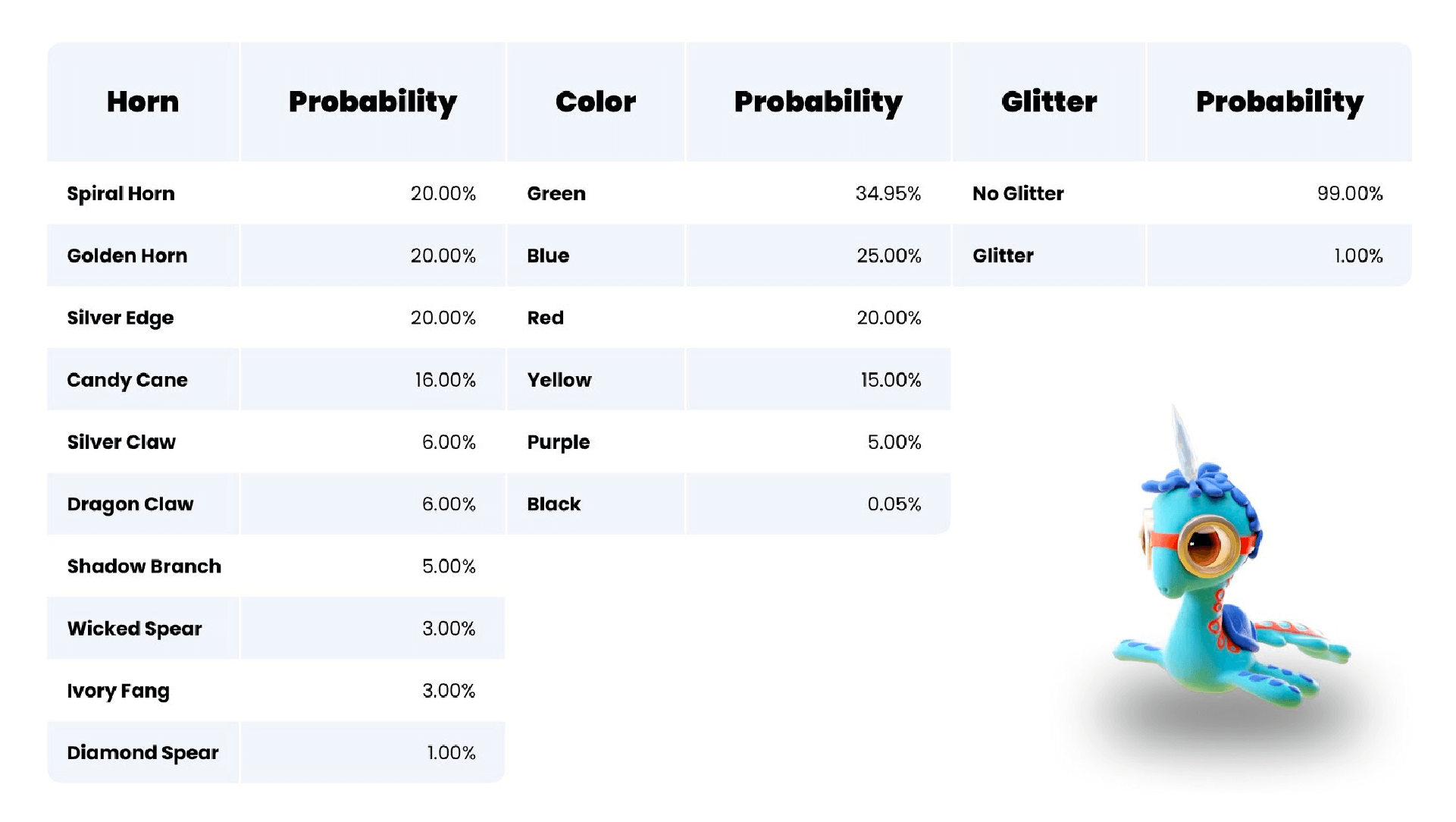 The Polychain Monsters team initially considered building a native random number generator directly into the gaming application. However, creating a secure RNG solution would take up valuable time and resources that could be directed towards game development. It would also introduce additional trust assumptions dependent on the honesty of the team unless a deterministic and on-chain-verifiable solution was created, which is a notoriously challenging computer science problem and extensive endeavor.

After opting to not develop an in-house solution, the Polychain Monsters team considered outsourcing RNG to various on-chain and off-chain alternatives. However, they identified that most RNG from traditional off-chain data providers were opaque, making it difficult to audit and assess the RNG’s integrity. Meanwhile, RNG derived from on-chain blockchain processes like block hashes were predictable inputs that could be manipulated by miners/validators. Essentially, miners knew the hash before they published the block and so could discard for the next block hash if it was unfavorable to the outcome they wanted.

Instead of putting the integrity of their game in question, the Polychain Monsters team knew it needed a randomness provider that was tamper-proof, unpredictable, and publicly auditable.

“Truly unpredictable random numbers were one of the key development challenges for the Polychain Monsters ecosystem. Not only did we require a secure source of randomness, but we needed one that is verifiable on-chain to give users indisputable proof in the authenticity of the random input.” 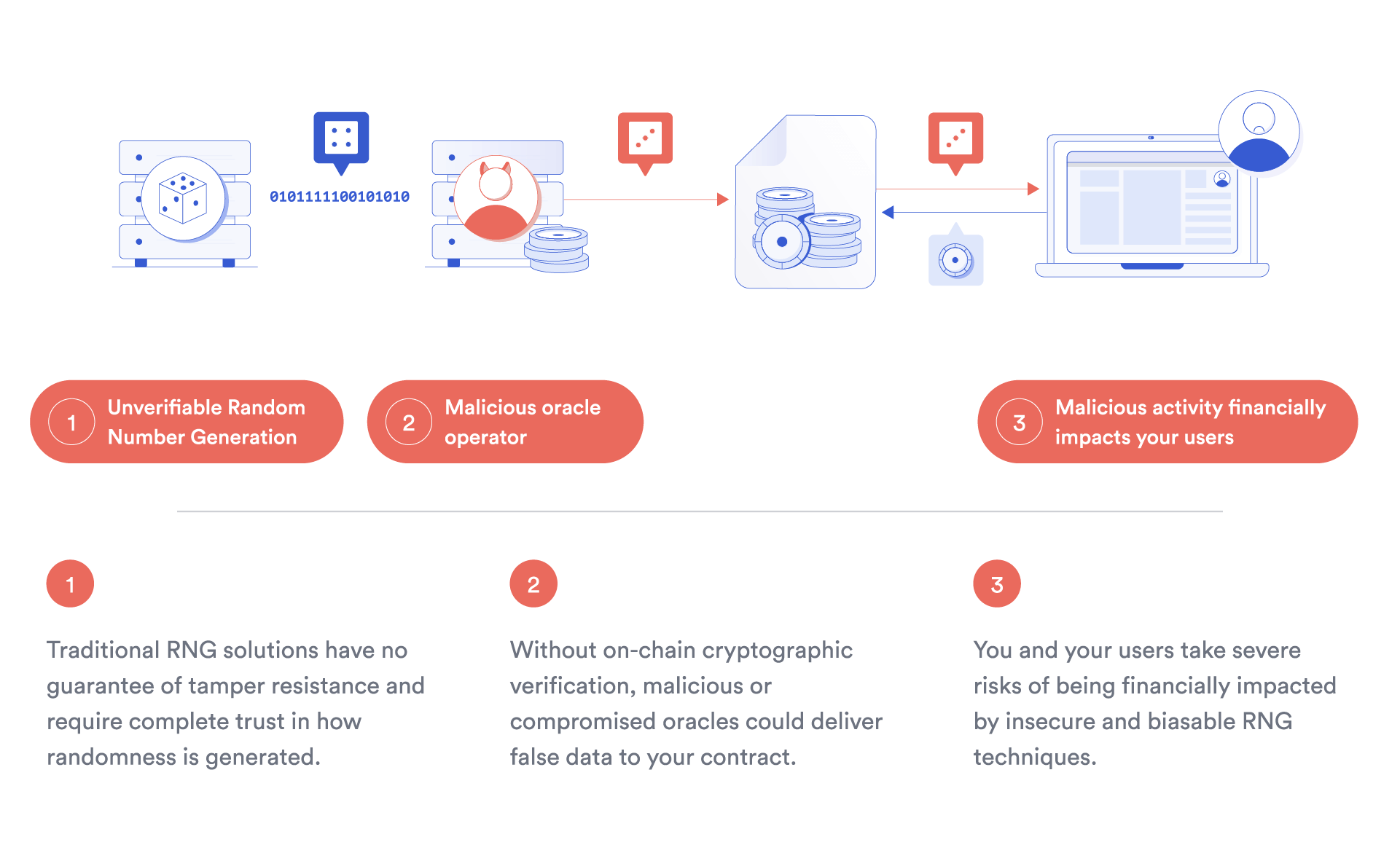 “Polychain Monsters collectors now have robust and verifiable assurances that all rare features are fairly distributed to users and securely generated in a manner that's ungameable by other players or even the Polychain Monsters team itself.”

After integrating Chainlink VRF, the Polychain Monsters team has generated 520,000+ VRF requests to facilitate the opening of Booster Packs with random NFTs—the highest number of VRF calls by any single team since the launch of Chainlink VRF. Moreover, the Polychain Monsters Marketplace on OpenSea has experienced 3400 ETH in trading volume, including offers as high as 75 ETH ($140,000+ at the time) for an Ultra Rare Bitcoin Unidragon, minted by a user from a single $30 Booster Pack.

Chainlink VRF has become a vital component of the Polychain Monsters collectibles experience, bringing increased transparency to its gaming ecosystem and creating a level playing field for the tens of thousands of worldwide community members inhabiting the Polyverse. Leif Eric Leiser, CEO and Co-Founder of Polychain Monsters, offered some advice for development teams thinking of integrating Chainlink VRF: “The integration process is easier than you might think. Chainlink Labs sets very high development standards. Even in frantically busy times, Chainlink Labs team members are always available for assistance and support. Their reliability, paired with the high quality of the product, is unique and very much appreciated.”