Celsius is a democratized reward-earning and crypto lending platform accessible via web and mobile app. Built on the belief that financial services should only do what is in the best interests of the community, Celsius is a modern platform where membership provides access to curated financial services that are not available through traditional financial institutions. Crypto holders can earn rewards by transferring their coins to their Celsius account and can borrow USD or stablecoins against their crypto collateral.

Celsius needed a secure, automated, and decentralized way to conduct audits of the reserves backing its wrapped tokens.

Talk to an expert to integrate Chainlink Proof of Reserve today

Decentralized finance (DeFi) has experienced a period of rapid growth in the last few years, reaching a peak Total Value Locked (TVL) of $250B while encompassing a thriving ecosystem of trust-minimized applications on a growing number of blockchains and layer-2 networks. DeFi attracts both new users interested in a permissionless financial system and veterans of the financial space drawn to the possibility of bringing financial markets to new technology more suited to the current age.

The arrival of the multi-chain era has led to many projects deploying smart contract applications across multiple blockchains. While the growth of DeFi has undoubtedly been swift, perfecting the user experience so that the benefits of this technology can unlock financial opportunities for a truly global audience has been a challenge to its adoption.

Celsius envisions a future where centralized and decentralized systems coexist, and offers a platform where users can trade, lend, and transfer funds and earn yield through an application that feels familiar but is powered by a decentralized Web3 technology stack. Through this platform, users can reap the benefits of both CeFi and DeFi.

CelsiusX, Celsius’ DeFi engineering arm, aims to build infrastructure that seamlessly bridges the gap between CeFi and DeFi. One of CelsiusX’s initiatives is creating a wrapped token platform that unlocks cross-chain liquidity between what otherwise would be isolated networks.

As users and developers adopt more blockchains and layer-2 networks, liquidity becomes siloed across the ecosystem. Unlocking this fragmented liquidity through wrapped tokens and creating more interoperability is a critical challenge for the ecosystem to solve. Without a solution to this issue, the benefits of permissionless composability are reduced and developers need to start from scratch every time a new ecosystem is bootstrapped.

But how can projects make sure that wrapped tokens remain sufficiently collateralized when connectivity between different blockchains is inherently limited? While ensuring that wrapped tokens are collateralized at all times is critical for a robust cross-chain ecosystem, using centralized intermediaries and manual audits introduces efficiency bottlenecks and centralization risks.

An automated process is required that helps secure the minting and redemption of wrapped tokens and enables Celsius to securely, transparently, and reliably audit reserves so that users can move assets between blockchains and provide cross-chain liquidity.

“As a key infrastructure layer of the Web3 ecosystem, Chainlink is the right solution to integrate for building cross-chain bridges.”

Chainlink Proof of Reserve (PoR) replaces lengthy, opaque audits with automated, transparent, real-time on-chain audits backed by cryptographic truth, using a decentralized network of nodes to prevent a single point of failure. Importantly, PoR operates independently from the projects being audited, increasing the resilience of the system. By integrating PoR, Celsius was able to secure the minting, burning, and redemption of its wrapped cross-chain tokens.

Here’s how the process works with wrapped ADA tokens on Polygon. First, ADA tokens are deposited to Celsius’ staking wallet on Cardano to initiate the minting process. A Chainlink PoR data feed on Ethereum then verifies the wallet’s ADA balance on Cardano and mints Ethereum-based cxADA tokens corresponding to the number of deposited ADA tokens on Cardano, which are then deposited into a secure Enzyme vault system on Ethereum.

This functionality also enables Celsius to use PoR as a circuit breaker to help ensure that wrapped tokens are only minted when there are enough reserves available in the vault, introducing an additional level of trust-minimization to the system.

“Chainlink PoR has enabled us to create a hybrid CeDeFi system that combines CeFi’s functionality and performance with DeFi’s decentralization and transparency.” 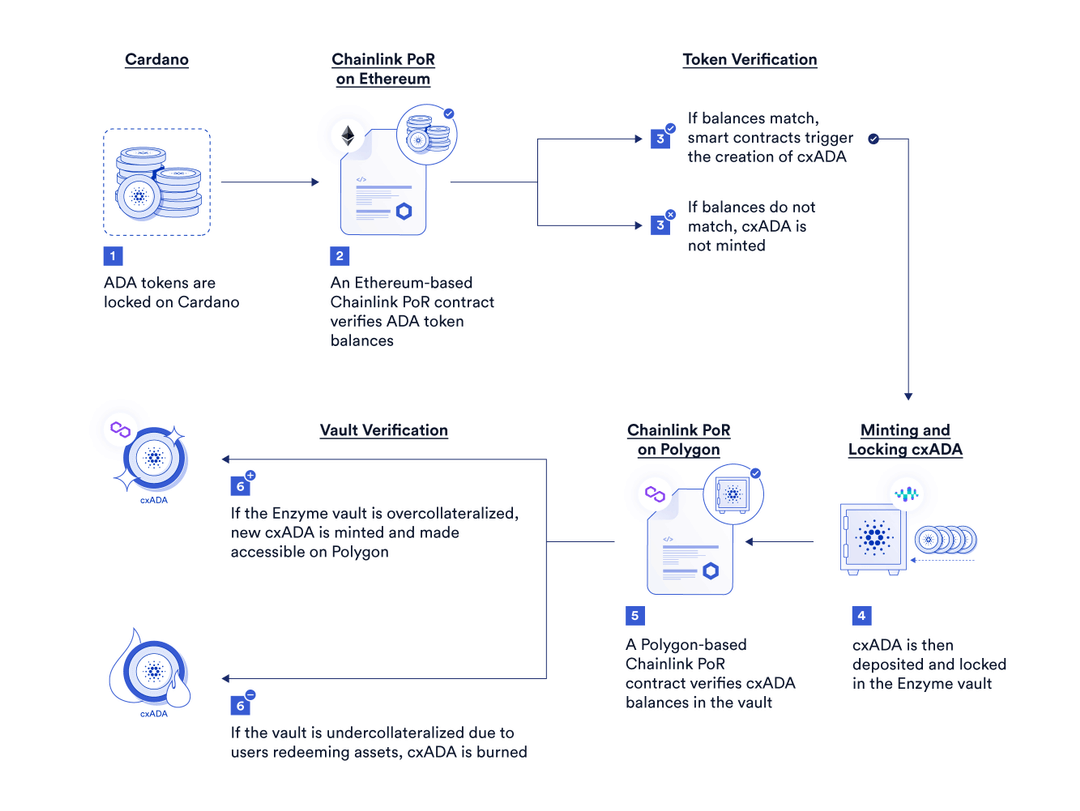 A quick primer on CelsiusX and its cross-chain liquidity bridge:

Celsius Is Bridging CeFi and DeFi, Enabled by Chainlink Infrastructure

Supported by its integration of PoR, Celsius is able to successfully bridge wrapped versions of tokens between blockchains. Developers can now build more advanced applications that utilize non-native blockchain tokens, and users can securely lock up their tokens and get seamless access to more advanced cross-chain functionality, such as lending and borrowing, prediction markets, yield farms, and more. 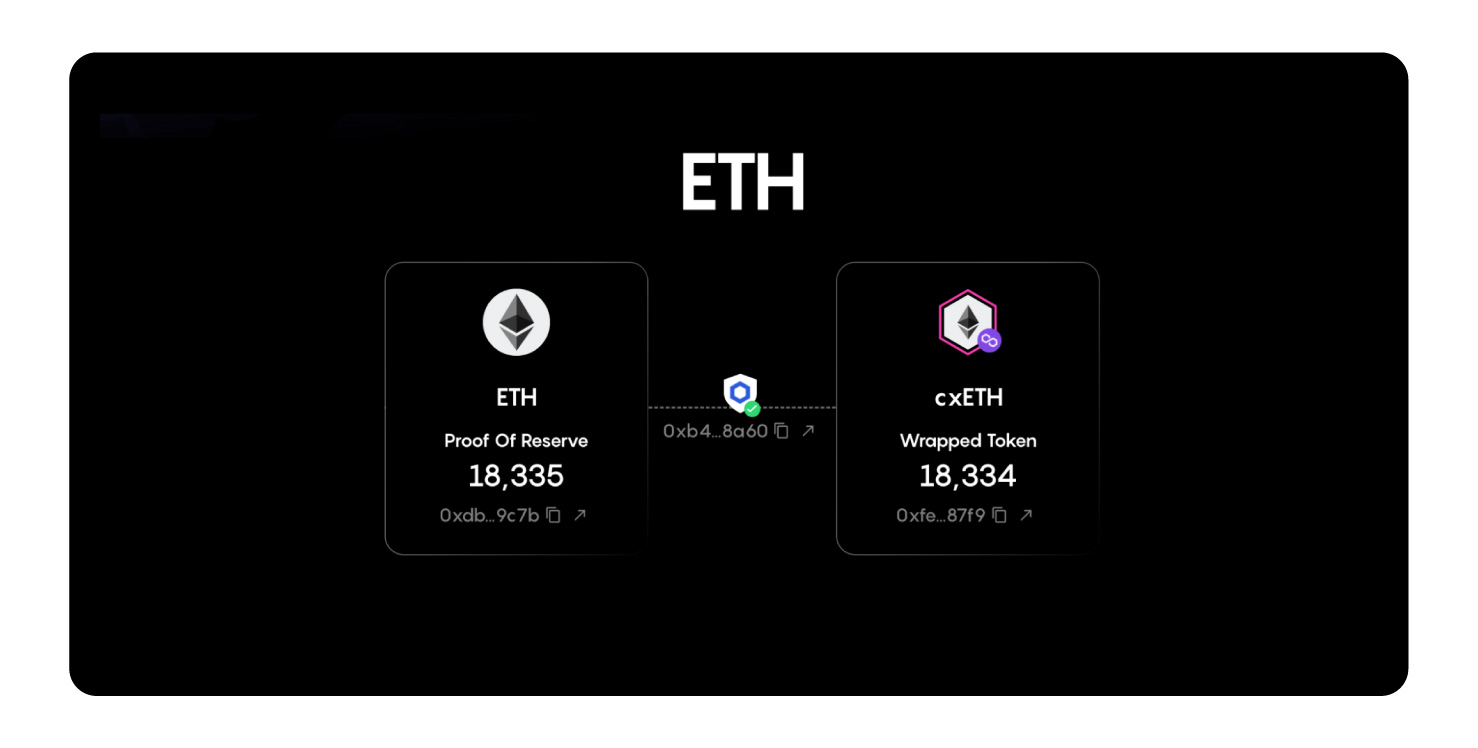 Emerging at the intersection between CeFi and DeFi, this hybrid infrastructure unlocks what would otherwise be siloed liquidity, creating more interoperability and opportunities for increased connectivity in the multi-chain ecosystem. Celsius is also planning to integrate CCIP to unlock even greater cross-chain functionality that will power more advanced smart contract applications.

PoR enables the creation of a financial system where the fractional reserve practices and inefficient manual auditing processes that have contributed to financial crises in the past are replaced with highly effective on-chain audits with strong decentralization and transparency, secured by math and cryptography.